Being an LDS church go-er, I have a different up bringing than many in this world. An upbringing that means the world to me and am very proud of. I was brought into this world and to no one's surprise, cried. I was given a name and a blessing which was Danica Leone Reidhead. Do I remember this day? Absolutely not. But my mom recorded what my dad said on that day and I still have it in my scrapbook, which I read not too long ago and cried. My mom still has my little white dress and my baby blanket at her house. I will pull the blanket out from time to time and hug and squeeze it.* 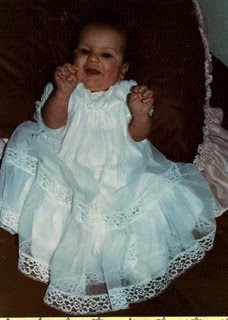 Then 8 years later I met with the Vernon Branch President who asked me if I wanted to be baptized and if I had a testimony of Jesus Christ. I remember crying in his office (shocker...me crying) and telling him I did. The arrangements were made and after my 8th birthday party in Show Low at the Dairy Queen, I went home and got dressed in another white dress that we borrowed from a friend down the street. I remember there were a lot of people there supporting me and I was a little nervous. I came out of the water knowing I did the right thing and then immediately started shivering. I got dressed, came out with a nice french braid and was blessed with the Holy Ghost. I remembering just crying the entire time and then shaking everybody's hand and giving my dad a really big hug. 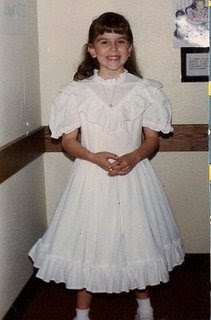 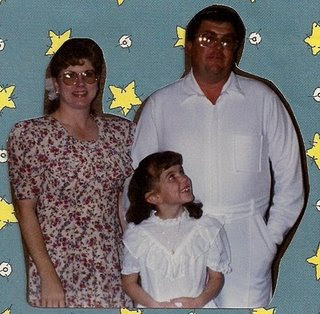 Nine years later, I was a junior in high school. I knew everything about the world. I owned it and everyone bowed to me and if they didn't then that was their problem. General Conference weekend in April 2004 I received my Patriarchal Blessing. I wasn't wearing white but I was once again clean and pure and ready to hear what the Lord wanted to have me hear. The Patriarch was Lavell Owens who was my intermediate school principal who I reported to when I lit a match in the library. Who knew burning books was a crime. (No books were actually burned...I blew the match out too quick. Oh but the thrill.) Anyways, my parents were there with me and after the blessing my mom was crying and my dad told me that there were some special things said. Now when I read that blessing, I can still hear Mr. Owen's voice and feel that same sweet spirit.


Another three years later, I decided I didn't own the world, nor did I have anything to my name other than the rent bill and a bank account. I learned some hard lessons and became a better person through my trials. Moving away was tough but I knew I could go home whenever I needed to and that I had family I could rely on. After a year of college and going into my second year, I figured, its time to grow up. Its time to move on with life and figure out just what I want to do. I prayed and prayed and tried my hardest to do what I was supposed to when I was set up with Mr. Cody Claridge. Who knew. I didn't until about 3 days after meeting this new guy that I would marry him. Seven months and three days later we met at the Mesa Temple. We both looked our best in our white clothes and knelt across the alter and said yes through some tears and I became Mrs. Danica Leone Claridge. I was scared to death but Cody looked calm and collected. Since that day, my life has changed in more ways than one. I love it. 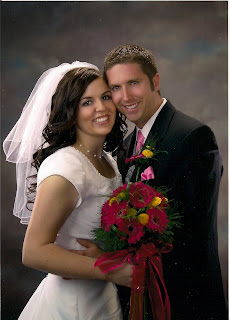 A year and a half later, we've created bonds and companionship but the biggest news is our little baby. I was nervous about the appointment with the whole awkwardness but once I met the doctor it was fine. She is really cool. They did the ultrasound of the baby that is about 3 cm big and we oo-ed and aw-ed but then she pushed on my belly and the baby moved. He/She started kicking his legs and arms. Cody and I thought it was the coolest thing ever. Surprisingly I didn't cry at the appointment but I am now. I know that this pregnancy is a great thing! A very rewarding experience (once the puke is cleaned up) and that it has already blessed our lives so much. The pregnancy became more real today seeing the little ankle biter and I'm smiling ear to ear. 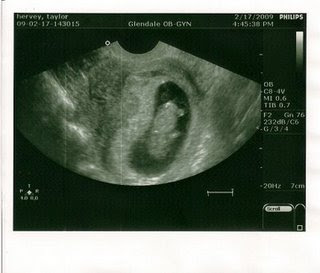 I guess my whole point of this post is, each step in our lives prepares us for the next...at least a little. I don't know how prepared I could actually be for a baby but I know just from reviewing my past that the Lord has blessed us and will continue to do so as long as we try our hardest. I'm thankful to have been born to goodly parents and into an LDS heritage. I'm thankful that they tried their darndest to teach me what was right and I hope to teach my little one the same things.
*=I had this blanket my Aunt Liz made till I was in 5th grade and then I was dared to not sleep with it. I took it everywhere and if it ever got left, I thought I would die. If I stayed the night at a friend house I would fold it up really small into a small pillow case, then at night I would find the edge and rub it. One time my family bought me a book called, "bye bye blankie" when I was like 7 and I cried and cried. I DID NOT want to get rid of it. If it got holes in it or the binding came unstitched I would sew it up myself. It is completely see through now and it has been "laid to rest" in my hope chest. I hope my baby is a blanket baby.

oh how sweet. You're quite the girl, aren't you? I love your post and the picture of the baby is SO exciting! I am glad Cody got to be there with you. We're so happy for you. You're an awesome daughter!

Oh Danica I have big tears...thank you so much for the entire post...and especially the blanket part. I remember making it for you before you were born. I'm so glad you loved it so much. The funny thing is RaLee was a blanket baby and she fell in love with a blanket my mom made her and she really clung to it after her death...then when she was 5 I bought her a book..."bye bye blankie" it had a Sesame Street character on the cover. I remember sitting her in my lap and cuddling her close with her "NEW" book and she was so excited. Sucking her two fingers snuggling her blankie and then I began to read. Why she got SO MAD! I mean she jumped out of my lap and grabbed the book and through it accross the room! Yelling, "NO BYE BYE BLANKIE NO NO NO!" Well we still have blankie and the book folded in a storage tote. So your story really touched me. AND congrats on your ultrasound aren't they just the coolest. I LOVE watching the girls faces everytime they get one. Amanda's was pricesless! CONGRATS!

What a beautiful baby!! Don't you just love the little arm and legs buds! It's so amazing seeing them progress through the stages of development!

What is your due date? I have 9 weeks to go, and I can't believe how much Isabelle has grown in 31 weeks! SOOOOOOO EEEXXXCCCIIITTTTIIINNNGGGGG

just wait until your 18 week ultrasound! The baby will move and you will be thinking, why can't I feel that!? Its sooo crazy! I'm glad everything went well... and I enjoyed hearing your story. Its fun to look back and remember those amazing times.

I just read your post again and looked at the picture. I am so proud of you and the life you have lived. You'll be such a good little mommy and daddy. We're excited for another grandbaby. It'll be awesome!!!! i love you.

You are an amazing person and were a wonderful daughter to raise. i can't believe all that you can remember about your childhood... I'm glad you haven't mentioned everything, but more is probably yet to come. Ha! We're so excited for you and the baby. It's amazing what technology can do. Back in our day we weren't for sure we were having a baby until it poked it's head out. Now they can tell you all about it months in advance. I'm sure I saw two though! Happy for you. Dad

Beautifully written, Danica. I am excited for the two of you!

I don't think that there is anything that will prepare us for motherhood. No matter how ready you think you are, it is an experience that no one can really describe. But like in your post, the Lord will always bless us and he comes up with the rest when we have many short comings. Being a mom is the greatest thing ever, but it is hard too. Be prepared to cry a lot more, good and bad. I am excited for you and know that you will be great!

That was a very lovely post. You have the sweetest personality...so nice. Thanks for sharing all your thoughts! I love you.