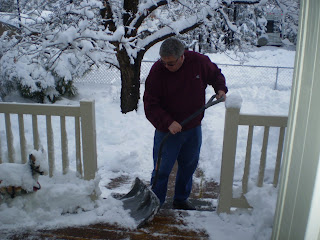 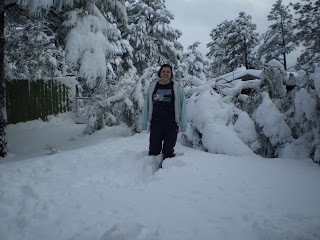 Don't be fooled...I shoveled too. Right before this picture was taken I jumped over to the tree so I would sink as far as possible and lost my balance and fell backwards. Mom laughed. I threw a snow ball at her and she threatened to throw my camera in the snow. Little brat.

Monday, my parents and I, left the valley to head back up to Show Low and it was raining so we put all of our luggage in garbage bags...well dad did it. Mom and I primped while dad did all the packing :). (He is just so good at it) Tuesday my dad had a two hour delay from school and then the rest of the week he had off. Mom was sick Wednesday and Thursday so we pretty much laid around and didn't get much accomplished. It snowed and rained and rained and snowed and snowed some more all week. Translation....we shoveled and ached and ached and shoveled. What a way to get the heart rate going and to hurt yourself. One day this tree fell down and smashed my parents fence.

Well I was in Show Low for the past little while and forgot my camera cord so here is a little update. 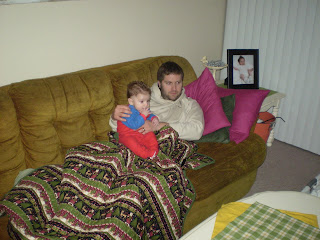 Watching TV with a sick Dad 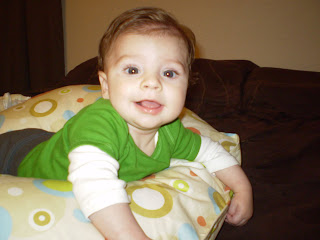 I wish I had a quicker camera to capture his smile. 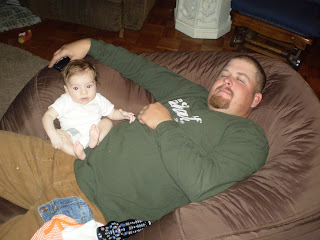 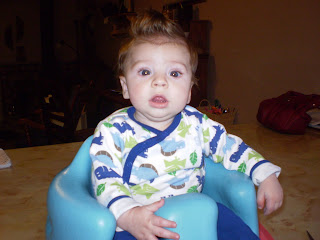 Right before his new hair cut in his new bumbo chair 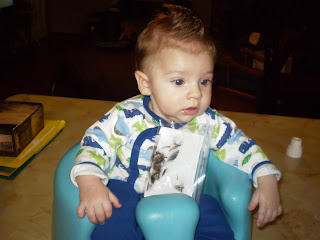 After his hair cut. See the bag of hair on his lap? 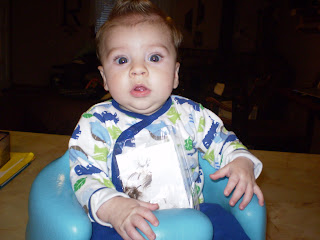 The boy definitely has a double chin. Why is it cute on babies?
Cole turned 4 months old. I can't believe it. Oh how he has grown.
Sings all the time now until he sings himself to sleep.
Kicks himself around and around in circles.
Loves to watch TV.
When he's eating and I try to eat or talk, he immediately pulls off to see whats going on. He doesn't want to miss a thing.
Been rolling over since 12/23 and its usually to the left side.
Sucks either his left thumb or his middle finger...or his whole arm.
Has a little blanket that he always loves to have and he puts it right in his face.
Blows bubbles all the time.
Only cries if he's hungry or poopy.
Pees in the tub almost every bath time.
Talks and Talks and Talks.
Sings the Navajo War Dance when being bounced by Grandpa.
Smiles ear to ear when talked to.
Downs a bottle almost as fast as Nana drinks a Dr. Pepper. :)
Had his first hair cut.
Sucks on his toes after he pulls his socks off.
Sleeps through most nights. Terrific I tell ya.
I love this little boy. Truly a blessing and such a wonderful baby.

He Found His Voice

This is what he does about 80% of the time now! Its our favorite!

Last nite Cole was on the couch sucking on his pacifier and I got up to go do something and I came back and he was stuck down in the crack of the couch. His pacifier fell down there and I guess he wanted it back. Cute little guy. Sorry its so long...I'm just an obsessed mother what can I say? 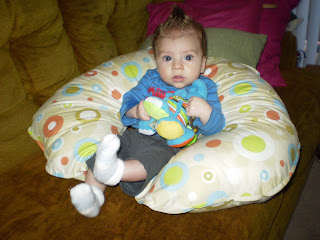 He'll sit and chew on his toy all day 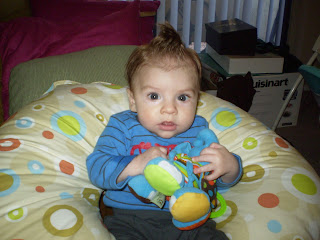 "Whats that over there?" 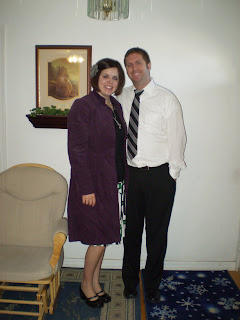 Cody told Shannon to take me shopping so we went. I didn't think I would find anything but wouldn't you know it...if I have money...it will get spent. I found this new purple coat and cute grey flower! Adorable.

We were able to go to Show Low on Christmas Adam (Adam came before Eve) and surprise my mom. We went to the annual Reidhead Christmas Eve party and enjoyed visiting with everyone! 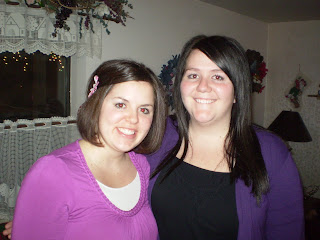 Me and Kalie Marie 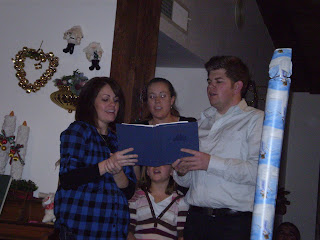 Tara, Kari and Rustin always sing for us 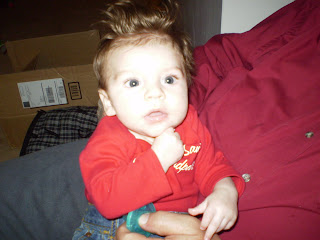 Cole and his crazy hair. His shirt says, "Who needs Santa, I've got Grandparents."
Christmas morning we woke up quite early but had to wait for Ryan to show up...which is totally out of character because he's usually the one who wakes us up at 4 o'clock. No one complained about the extra sleep though.
Mom didn't make her famous sticky bread this year. (Famous for being burnt and stinking up the house) Instead we had her famous cinnamon rolls. (Famous for being the most delicious in all of Navajo County) 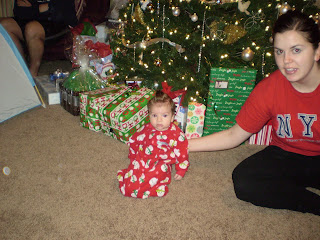 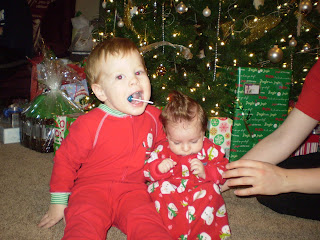 Brody being a little sweetie to Cole 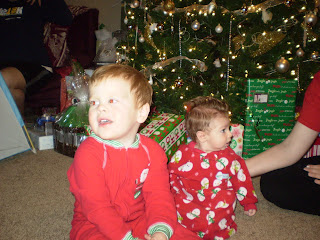 Two boys not caring about the camera 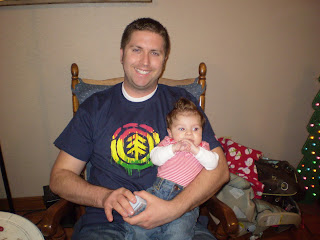 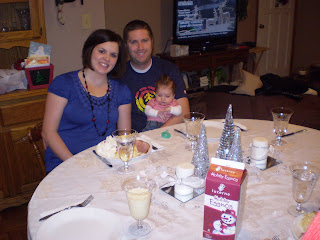 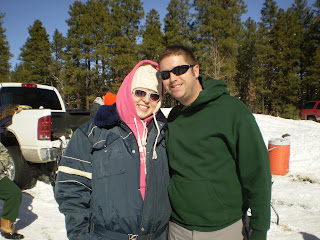 Tubing the day after Christmas. It was quite fun waking up that morning trying to get the beans cooked in the pressure cooker. Swear words, slammed cupboards and NO patience left, we were a happy family once again. 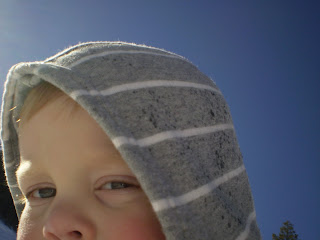 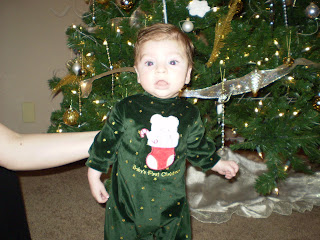 My mom has a porcelain doll that wears this outfit so I put it on Cole. It was perfect. 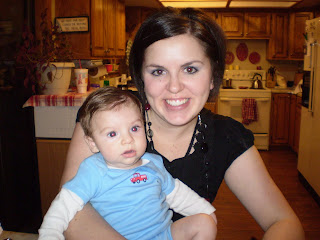 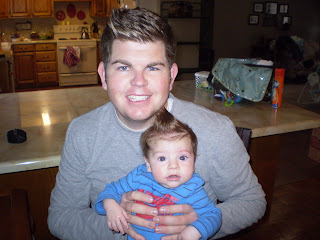