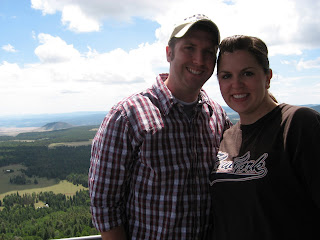 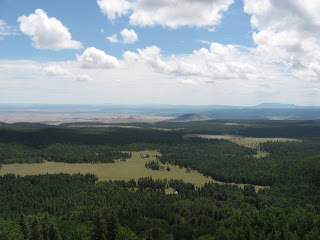 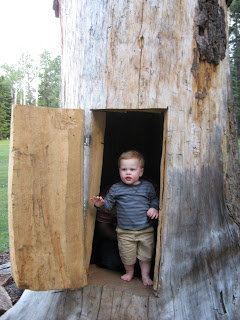 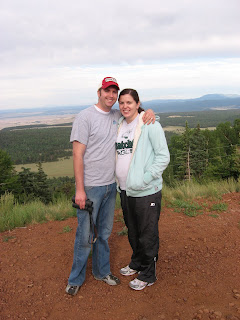 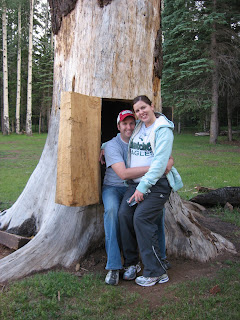 For the fourth we made our little journey up north to Show Low to 1) cool down 2) see my family 3) camp 4) eat (maybe #4 should be put as #1 cuz thats mainly what we did). We stopped in Payson and I was actually cold. I haven't been cold since like Christmas! I always have a feeling overcome me when we pull into Show Low. I can't really describe it but its my heart's home. So many memories just flood my mind. We didn't get into town until late so we stayed at my parents house and decided to drive to the camp out Friday morning. Cody and I were hungry and we searched their cupboards. No bread. No milk. Not even bran flakes. Not even any sweets to be found. The only thing was crackers that looked like they'd break a tooth. So we went to bed hungry and woke up early to get to the camp out for breakfast. I couldn't take it! I had to eat something so I scrambled some eggs. Burnt the heck out of them and then ate an apple. Three minutes later I was puking in the bathroom but missed the toilet and hit the shower curtain! Finally we were on our way and enjoyed the scenery. After several phone calls with my mom and very specific directions, we got lost. Dad came to the rescue and found us about 8.6 miles in the wrong direction.
We ate and got camp set up. Oh and let me just say the syrup my mom made was the best thing ever. I was constantly looking for something to dip into the syrup. My fruit. My sausage. My eggs. Anything! It was terrific. We got to go to the look out, spend time with the Porters and Ryan, go to Sunrise, Big Lake, Springerville, Sunrise again, a lot of back roads (dad was driving so of course there were many scenic detours).
I'm not sure what was the best, going to Sunrise the first time to the archery shoot out where there were booths set up for shopping. I don't think me and my mom have ever shopped so quick...THERE WERE NO PURSES OR JEWELRY ANYWHERE. I guess thats what made it a man event. What a waste.
Or was it the time at the Sunrise fireworks when dad rolled down his window and started talking REALLY loud like an Apache! It was hilarious. The more he did it the louder we all laughed. The fireworks were awesome. My dad managed to get us front row seats about 100 yds from the launch pad and right by the lake. It was beautiful. 45 minutes later then fireworks were over and an hour and a half later we were out of the parking lot. Lots of ya-ta-heys thats for sure!
Or maybe it was when my dad and Pete were cooking burgers and Pete's started smoking really bad so he had to jump up to avoid getting the black lung. Well when he did jump up he was coughing and lost control of the other end. Dad and I looked at each other real quick and dad said, "well let’s hope that doesn't ignite!" I thought I was going to die laughing!

Or maybe it was when Tara would start talking and Brody would yell every time she talked so she finally shushed him. Then she'd talk again and he'd start shushing her and crack up laughing. I love that little boy! He desperately wants a baby sister. He pointed at my belly and asked "Baby? Baby?" I said, "Yes baby." He said, "Baby sister?" Trace has been working hard on him apparently.

Or maybe it was right before I left Show Low with my dad and was trying on some clothes and put on a blue dress of my moms and looked like a total transvestite! Not even exaggerating. It was awful. Mom almost wet herself and I felt like such a man! I even talked in my man voice to top it off!

Back ground story....Cody's grandma's boyfriend's name is Clord. My brother's dog's name is Claud.
Or maybe it was when everyone was dead asleep in the camp trailers and Cody and I were out in our tent....safe from the elements...when he heard this awful hacking noise. I thought it was a javelina. Then Cody yells, "Clord!" I immediately correct him and say, "Claud!" We laughed so hard! I still am actually!

It was an awesome trip and I am so thankful we could go! I love being with family. Somehow after all that eating, I lost two pounds...must've been all the laughing!

Thanks for the stories. That was so funny. We are so glad you got to come up. It was the best time!

Sounds like your cool, enjoyable 4th beat the heck out of our hot and muggy 4th. Glad it was a good time. See you soon.