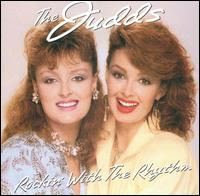 So over Christmas break we were all sitting around and we started watching Wynonna Judd's Tribute to Ice Skating or something like that. Her and her mother were singing the "Love Can Build a Bridge" song. At first it was just Wynonna singing then out came Naomi. They walked to each other and when they met they held hands and looked into each other's eyes and kept singing. Well after the song was over, Cody leaned over and whispered in my ear, "are they together?" I just gave him this look like, "You can't be serious...but you are!" I said, "No! They are mother and daughter!" He said, "Well I couldn't tell and they were holding hands and gazing into eachother's eyes. What am I supposed to think?" We all got a real kick out of it! My husband...makes everyone laugh without trying!

Yeah that was pretty funny. I thought he was teasing, but I guess if you don't know the Judds then it prob looked a little odd. haha Fun times.

yeah, I was laying there on the lovesac thinking, he can't be serious? and he was. It was so funny. I think that might have been the funniest thing of the holidays.